Food advertising encompasses a large amount of the ad time we see on television. On children’s shows food ads make up 50% of the advertisement time. These ads are almost completely dominated by unhealthy food products; 34% for candy and snacks, 28% for cereal, 10% for fast food, 4% for dairy products, 1% for fruit juices, and 0% for fruits and vegetables. Children also rarely get to see public service announcements or advertising for healthier food 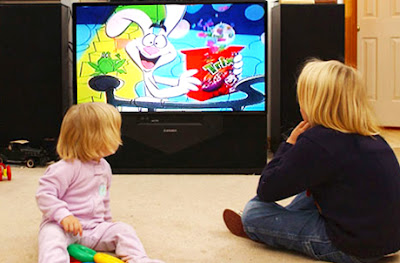 There is certainly a problem there when it comes to exposure to unhealthy food on television. Exposure plays a big role in feeding your child the right messages when it comes to healthy or unhealthy food choices, but more importantly is environment. To have a healthy child at a healthy weight is it crucial that the child is in an environment that will allow him or her to be healthy. At a young age the child will follow the parents example and eat simply what is presented to them. So the responsibility to raise healthy children that are not overweight is the responsibility of the parents at an early age. Then the parents should teach their son or daughter to make healthy food choices and hope all will go well when they are on their own. The environment that child is brought up in will be a much higher determinant whether they become overweight or obese then the commercials they see on television. Very often I see that if the parents follow healthy eating habits their children do too. The opposite is true as well; if the parents eat unhealthy their children will have a harder time eating healthy because they will have to work harder for it.

That being said it’s a shame that children are exposed to so much poor food advertisement. In general a lot of food advertisement that is out there are for snacks and fast meals. There is almost never or very rarely advertisement for fresh fruits and vegetables, or natural whole ingredients that are not branded. Advertising often always covers foods that are packaged, and processed. And the times they do want to target the health conscious, they will talk about low calorie foods like from Weight Watches that are heavily processed and are more manmade than gathered from the earth. 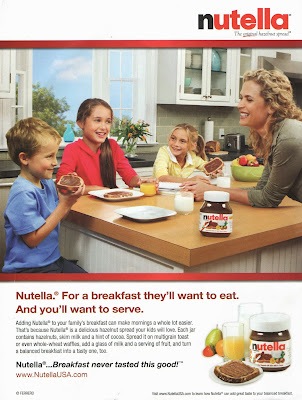 Advertising does play a role in making people obese because the wrong messages are sent about health in typical advertising. For useful information you have to dig for it yourself. A prime example was the old advertising for Nutella (the one I linked is different but follows a similar example). As I remember it showed a girl climbing a rope in gym class and everyone was staring in awe. Then when you wonder how the girl managed to do it, her mother explained from the kitchen that she was served Nutella in the morning to give her the strength and energy she needed. The ad ended with the mother saying, “I make sure I serve my children Nutella every morning”. So the message is that Nutella will make your child energetic and strong. Well while the chocolate from Nutella will give your child a moderate boost of energy it’s definitely not in the best form. Nutella is not a good quality chocolate and really, I think its common sense to know that it’s not eating Nutella everyday that you are going to be a glowing example of health and vitality. What really would give your child a big boost of healthy all natural energy that would last some time would be a glass of green juice or a homemade vegetable and fruit smoothie, but who would advertise that? Well V8 comes close and it tastes pretty good.

Advertising is meant to promote products and services; it’s not meant to be a public service to prevent obesity. Public service announcements will be in charge about promoting health to children on television and they should invest more money in doing so. I also believe schools should educate children on good health and explain the causes and effects of poor food choices beyond the obvious. And most importantly parents should educate themselves and their children on good health.

Advertising’s role is to sell a product in the best way they can. If that means making a food look extra delicious and delectable then they are doing their job. They are pushing the envelope a bit when they promote junk food in this way but still, it’s their job to promote their product. Ethics in advertising has gone a long way. Ads used to promote cigars and cigarettes unrestrictedly. Now since people became aware how damaging they are to your health they are not advertised and in fact they have warnings and imagery of the effects of smoking right on the boxes. Maybe in the future junk food advertising will do the same.
Posted by Unknown at 07:45